Its been a month or so since my last confession! I have been poorly for a while but back on top again. FINALLY!

So Leah and Brad have been with me for over 2 months now. Brad comes always the minute i call him, Leah still nervous and shy although i am the only one thats in her circle of trust! Although shes getting braver and will do anything for chicken or cheese.

Had a terrible week last week, due to a horrendous dog fight (NOT with my dogs). We were out walking and this dog came out of no where, and grabbed Tara Leos sister by the throat. She was lucky she has a full neck ruff of fur, and needed a couple of stitches or i fear she wouldnt have come off well at all. I am still yet to walk her again (stitches stopped walkies for a little while as its been so wet lately), I had 2 little dogs with me, April a Lhasa who belonged to my daughter, and Peggy a little pug cross. This horrible dog then went for April (who i never let off the lead until this day) and so i dropped her lead and let her run. 4 hours she was hidden away for, until someone shouted shes hiding under the chicken coop next door. Phew although scared and nervous she was unharmed. Peggy sadly was stuck in the dogs mouth, head and shoulders fully in shaking her. eventually after i proper kicked it in the face and bum, he dropped her. I snatched her and ran straight to the vets but sadly she couldnt be saved and died 36 hours later. 🙁 Heart broken doesnt really come close. Then i find out the same dog killed a yorkie the day before. Angry i was furious. I have a few dogs as most of you know, i am never stupid and only take out the amount i know i can control and protect.

So I get the call from the vet to say Peggy had passed away at 1.30 am. 3pm Leah got out, Legged all over to see the neighbours for chicken no doubt! 6 hours she was running free no matter how close i got she wasn’t interested and carried on running! Eventually turned herself in as a fugitive to the vets who rang me. She was over whelmed to see me, and was singing before i got through the doors. So i forgave her pretty fast and that was ok. I think seeing her reaction told me she really loves me even though she doesn’t always show it.

Brad wants to meet everyone and Loves the sound of my van. The minute the doors are opened to the back he gets super excited and cant wait for our next adventure where ever it maybe. Hes such a sweetie and a huge poser!

Leo is a little shit lol but we love him. To be honest i know he could be much worse, and does take direction. Although i have noticed that his rear leg or back muscles seem worse when its raining (great when we have had 6 days of nothing but rain) so i take him out on the lead in the garden and then shut him in again. Seems to work better as he doesn’t have so many “episodes”.

So Moving on now to a little bit of news well about the size of another dog actually! Melinda Joy knew i was tempted with Kasey, well I decided i needed her in my life so 2 days ago I collected her from the Airport! So Kasey is here now as well. Shes a front leg amputee and only recently been through the change, due to fractured pelvis that needed sorting before nerve damage to her front leg, but shes amazing and adapted so very well. Shes such a sweetie happy to give everyone kisses and cuddles. Her tail hasnt stopped wagging since i collected her and i think shes a really happy pooch! Still Early days after her long flight, and she has made friends with Tara and Leo, and tomorrow she can meet someone else and gradually join the gang. 🙂

So this Nana is a very happy Nana and i dont think I realised how much i needed Kasey rather than her needing me! The truth is I dont mind i love her to bits, although arguing over my bed at night I dont think I am winning yet lol 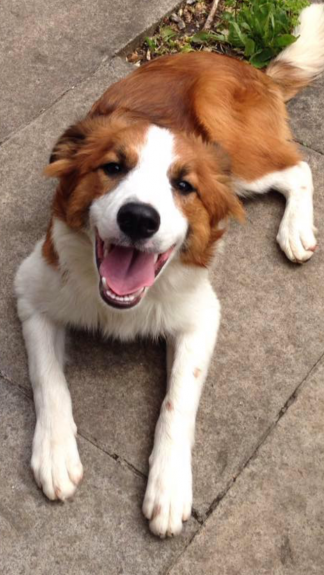 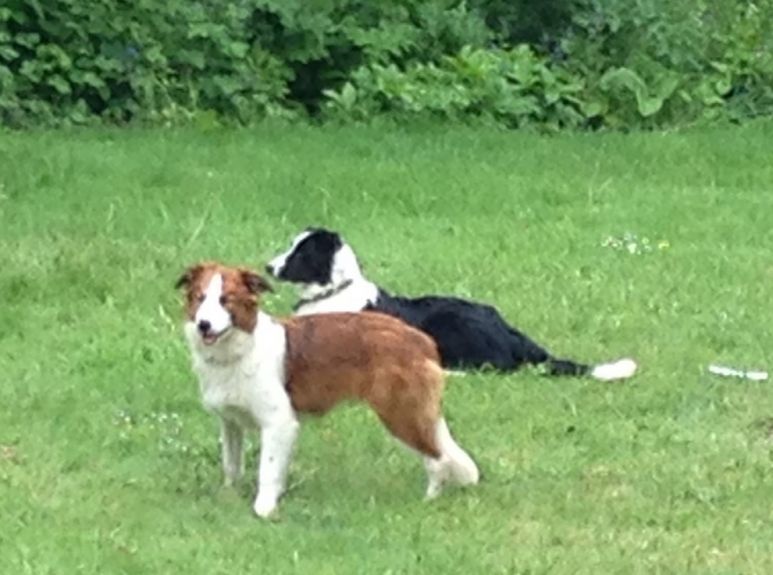 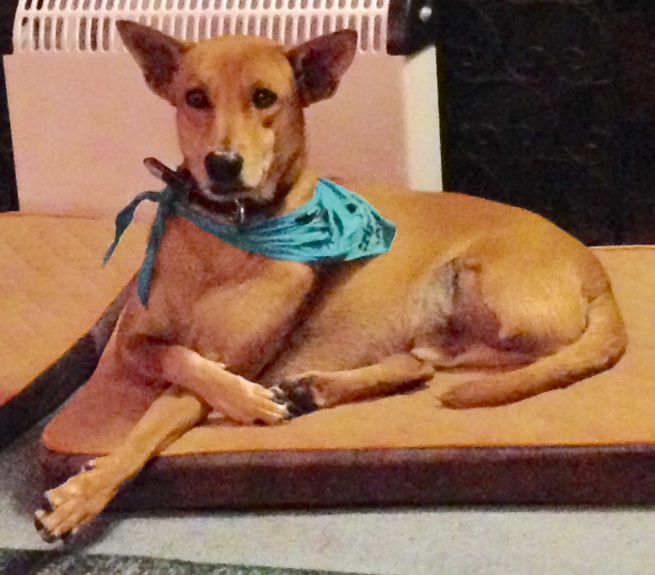 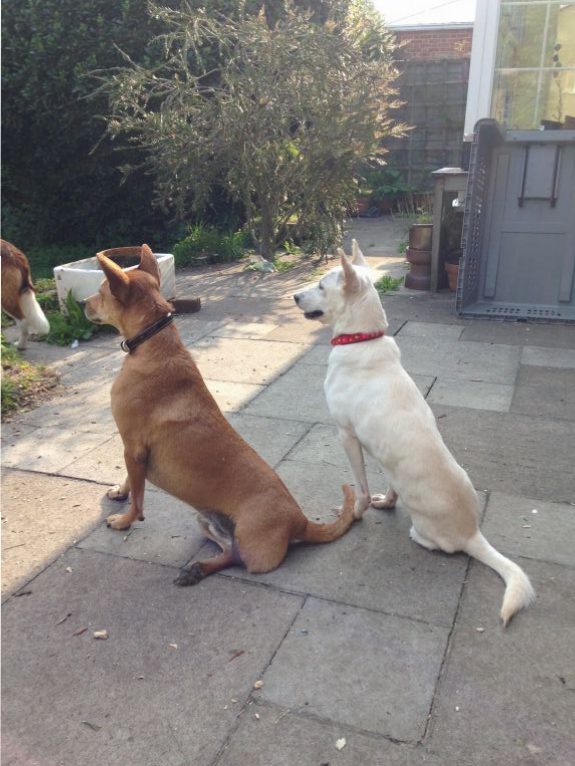 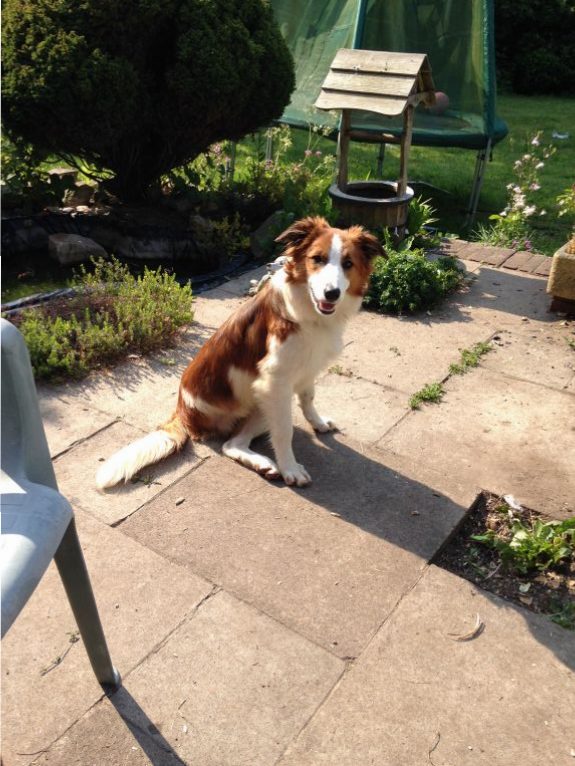 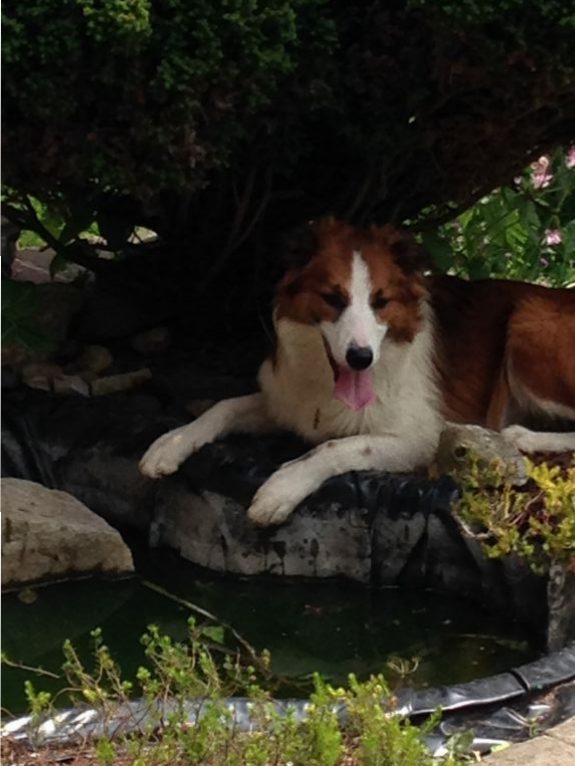 Well So much has happened in such a short amount of time!

Leah and Brad are thriving and are living life to the maximum. Leah although very choosy who are her friends in human form. She is getting there and loves the ladies more than men! Shes my white shadow who is always nearby and loves to sneak up on me!

Brad is really filling out with all the running around in the garden hes starting to get very stocky in the front of him. He loves everyone he meets but more importantly they love him to! Hes such a sweetie and shows everyone what being a tripawd is really all about, by racing up the garden at top speed with Leo! a force to be reckoned with for sure!

Leo is having his man bits removed next week as our vet wanted to wait until he was off pain meds, and moving more freely before surgery again. Although i am nervous about it, he needs to be done, as humping my flower pots is deemed unsocial able behaviour! 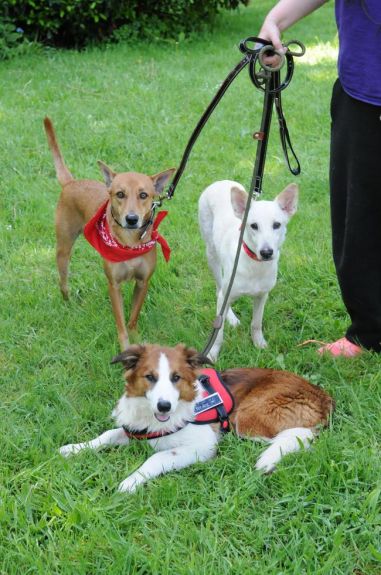 So the freshly adopted new pair are settling in amazingly and we are all getting along well.

Other than raising money for these gorgeous fur kids then getting them on the plane not much else to report, on the work before they arrived.

Although all the credit goes to Melinda and MDDB as they were doing all the stressing for me!

Both dogs were understandably scared when arrived in the uk and of course didn’t trust anyone.

So was a little daunting getting them into the van but we managed it and they haven’t looked back now.

Brad very easy to win his affection as he soon realised I was nice and wasn’t going to hurt him or do anything he wasn’t happy with. He’s my bed buddy and every time I put my hand down he’s nose is always there.

Leah was more of a challenge as she wasn’t prepared to allow me into her space,  I can say after 4 weeks and 2 roast chickens she’s finally allowed me in and trusts me now! Phew lol she’s not keen on anyone else yet but she’s getting there. 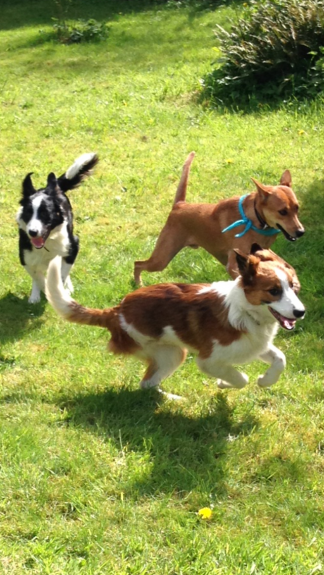 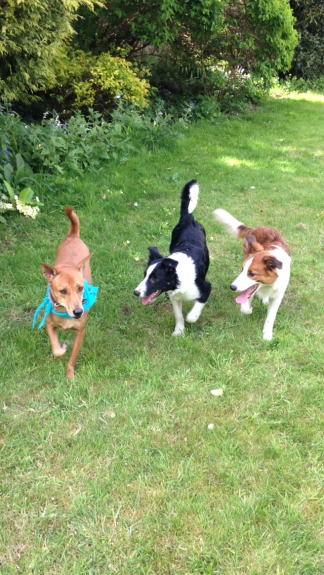 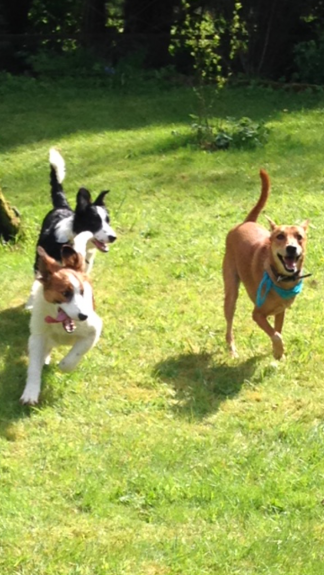 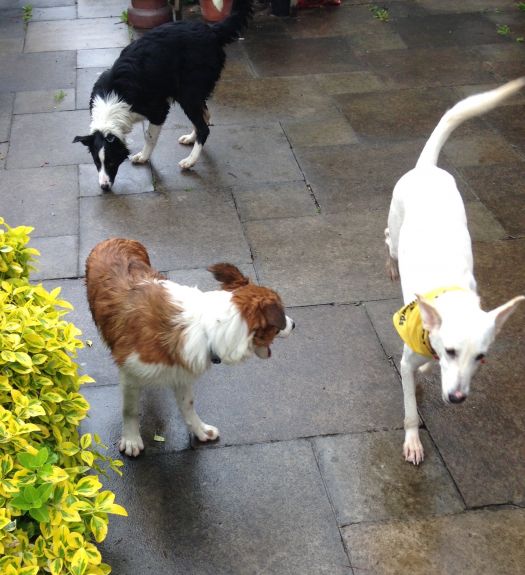 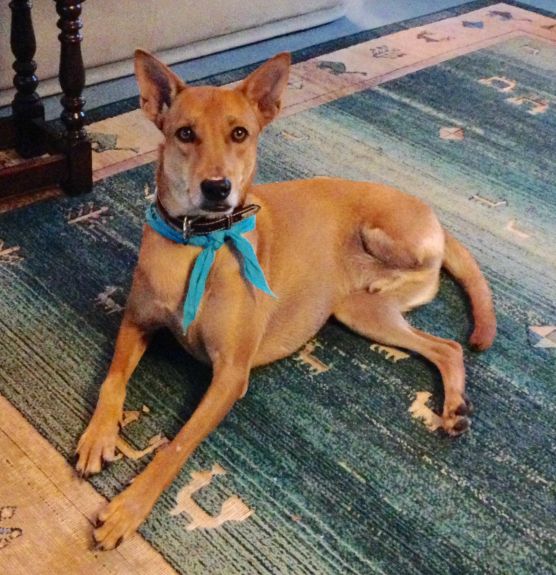 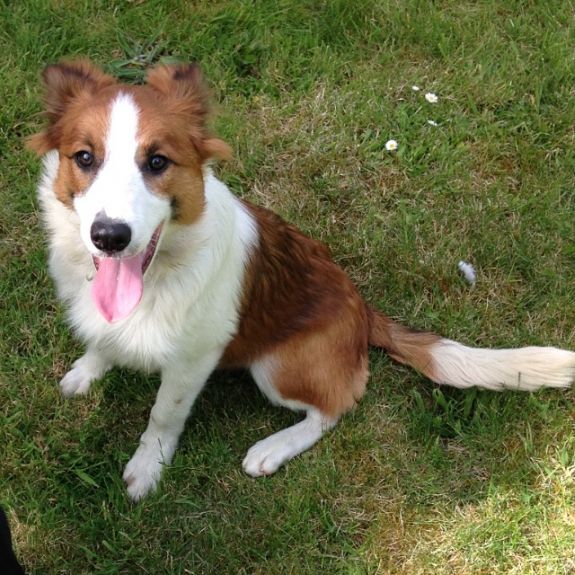 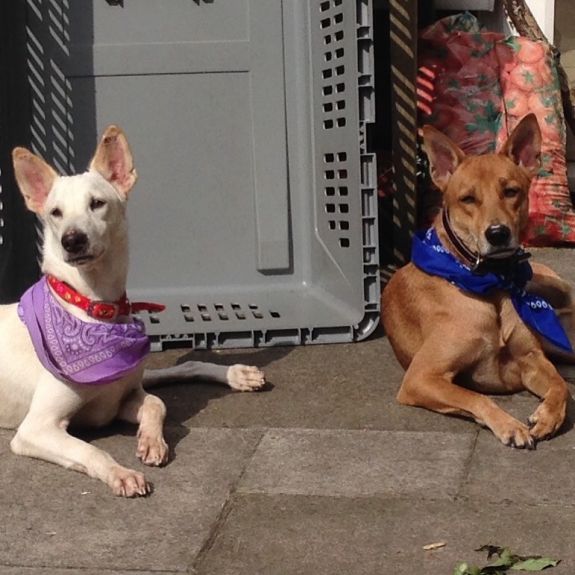 Posing in the sunshine! 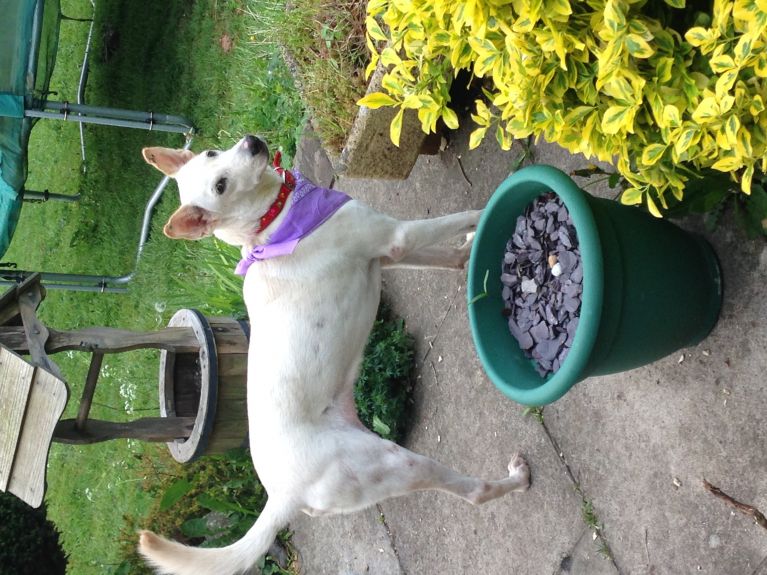 I think I should mention of course Leo! Since these guys have arrived Leo hasnt needed any pain medication nor has he strained his back (even though he’s more looney than ever) and I am hugely proud of him as he’s done amazingly and is loving life totally ❤️ 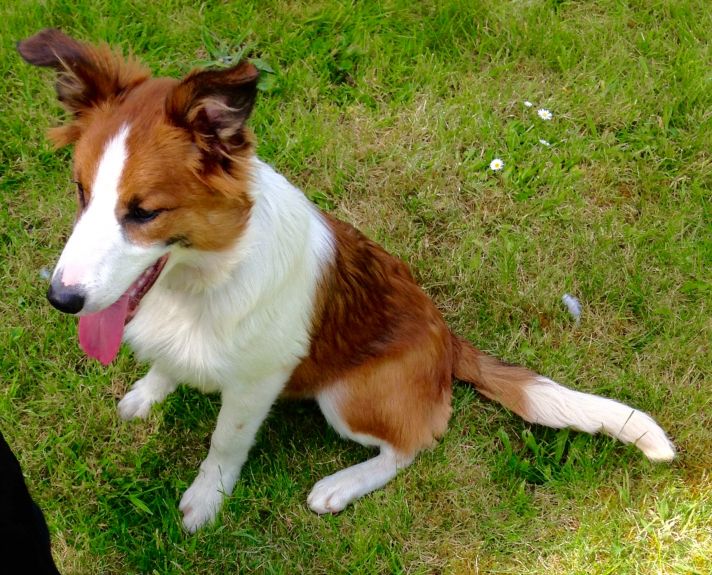 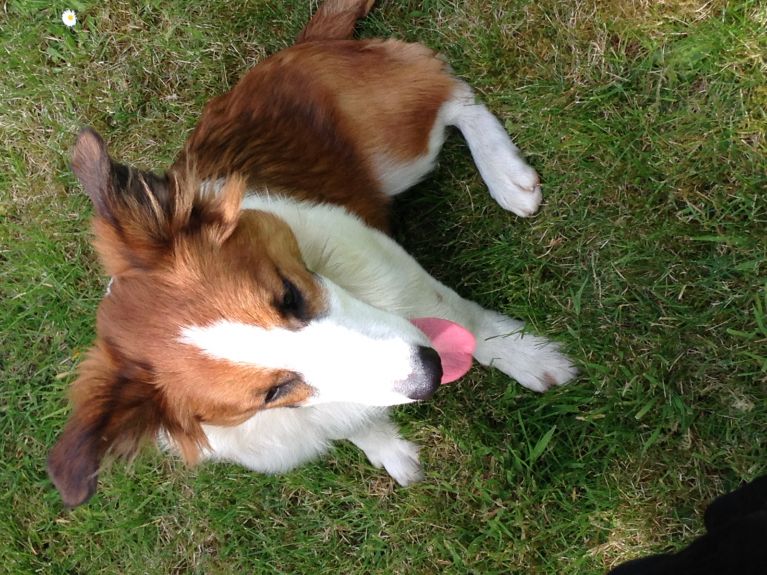 About Your Tripawds Blog:

New Tripawds Bloggers: Please review your default first blog post at left for lots of helpful links for getting started with your blog or review the Help Videos in your dashboard. Edit these widgets from your Appearance settings to remove this notice, upload a custom header photo, or choose from 130+ themes, and much more!

Leo My Brave Tripawd Border Collie Pup Plus Brad and Leah! is brought to you by Tripawds.
HOME » NEWS » BLOGS » FORUMS » CHAT » YOUR PRIVACY » RANDOM BLOG